We all love our Michigan spring warm-up as flowers blossom, our budding leaves unfold and we’re greeted with an outdoor scent that awakens our senses with yet another beautiful Michigan summer right around the corner.  Ahhhh yes, with that fresh air we’re all likely to begin spending more and more time outdoors enjoying all that our Michigan springs and summer’s have to offer.  And many of us spend that time with family and friends on our decks.  In some cases that can mean several people on a suspended deck at one time.

Let’s talk deck safety.  This is really important because according to a study done by the InterNACHI, (International Association of Certified Home Inspectors) only approximately 40% of decks are actually built safely.  Further, it doesn’t matter who built the deck – there is no correlation between the number of deck failures and DIY vs licensed carpenter-built decks.  In other words, just because a building permit may have been obtained doesn’t mean it was built correctly.

This is what a deck failure from separation from the home looks like.  Imagine what could happen if you were on this deck when it failed! 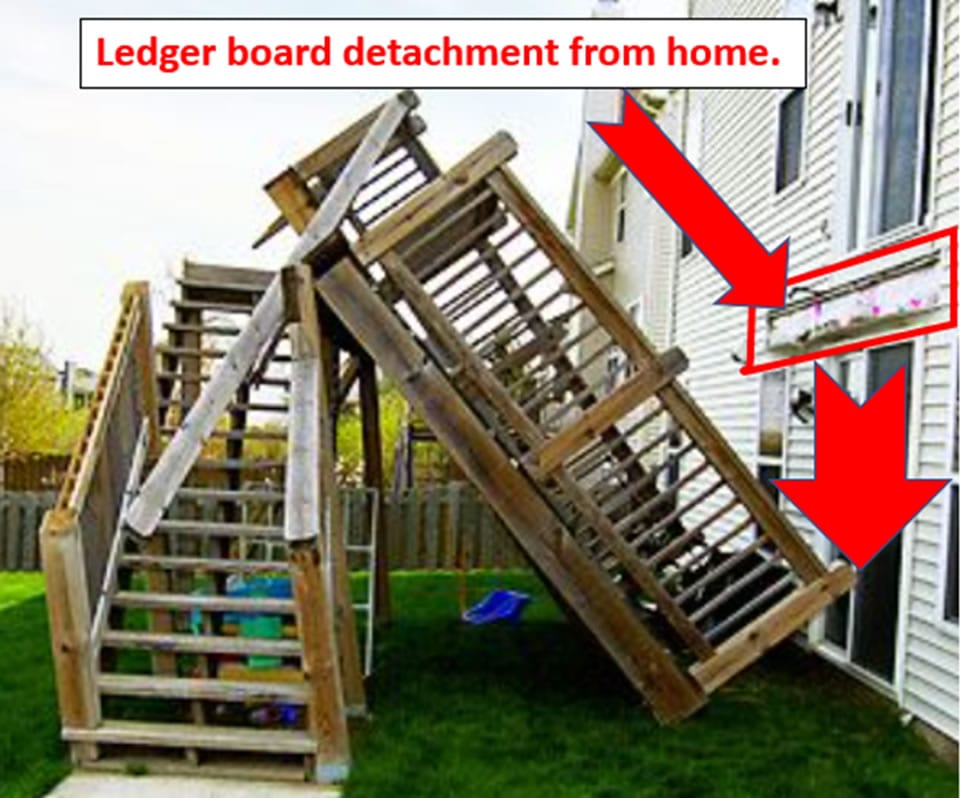 As a Michigan Home Inspector, I see improper deck attachment very often.  The most common defect I see is improper fastener usage. (You cannot simply rely on nails to attach a deck ledger board to the home.)  The second most common defect is improper ledger board flashing.  If the flashing isn’t present, or its installed incorrectly then moisture can and often will cause deterioration of not only the deck, but also the side of the home!  This is when repairs can become very costly as moisture migrates into the side of the house and causes deterioration.

In closing, we all know that we’re blessed with some of the most beautiful lakes right here in Michigan and nothing beats spending time on a deck overlooking one of our many awesome lakes.  Whether your deck is new or old, at Elite Inspection Services we can inspect and determine whether your deck is safe for another “summer load” of friends and family.  If you’re buying, or selling your home, or you’d simply like “peace of mind” in knowing your deck was built properly, reach out to Elite to have you deck inspected by a “Certified deck inspector” (Elite Inspection Services.)

Preventing ice dams on your roof!

So we all know that installing gutters can help prevent serious and costly foundation issues by...
Read More

The importance of a proper gutter system for your home.

Michigan summer is in full swing right now.  Although we’ve been dealing with a drought throughout...
Read More

Call Today to Find Out More or Schedule An Inspection.

Call Today to Find Out More or Schedule An Inspection.